Lhasa: the Capital of Tibet

You are here: Home » Destinations » Lhasa: the Capital of Tibet

Lhasa is the capital city of the Tibet Autonomous Region, and it serves as the center of Tibetan politics, economy, culture and religion. It is located on the North Bank of the Lhasa River, which is a tributary of the Yarlong Tsangpo.

The capital dates back more than 1,300 years. It was founded in 633 A.D. under the leadership of King Songtsen Gampo. The area of the city covers 32 square km and the population is over 310,000.

In Tibetan, Lhasa means “The land of the Gods“, or “Holy Place”.

Need directions and more ideas? Please, contact us and we will help you to find these and other great places worth visiting!

Lhasa stands at 3,650 m /12,000 ft above sea-level. At that elevation is usually takes a few days to fully adjust to the lower oxygen level. It is relatively easy for most of the visitors to adjust to Lhasa altitude. Because of that, Lhasa is a great starting point for a tour in Tibet.  After a couple of days in Lhasa, you are ready to visit higher areas of Tibet.

More information about altitude in Tibet, how to acclimatize and prevent altitude sickness»

Lhasa enjoys the delightful weather, throughout all seasons. It has 3,000 hours of sunshine annually-hence its popular name“The Sunshine City”. The temperatures vary greatly between night and day but remain fairly uniform during the year. Winters are neither severely cold nor summers unbearably hot. The average annual rainfall is only 230-570mm, and at least 2/3rds of the year are frost-free. The best time to visit Lhasa is from March to October. Details about the weather»
Best time to visit Tibet»

HOW TO GET TO LHASA

By air. The Lhasa Gonggar airport is 62 km/ 39 miles outside of the city. It is one of the highest airports in the world surrounded by mountains reaching over 6,000 m/ 20,000 ft. There are many domestic flights connecting Tibet with all major Chinese cities. International flights connect Lhasa with Nepal’s capital Kathmandu. These domestic and international flights offer safe, fast and efficient services.

By train. There is a train station in Lhasa, connecting it to cities in China and Tibetan cities, such as Shigatse.

By land. There are many recently-built roads and highways connecting Lhasa with Qinghai, Sichuan, Yunnan, Xinjiang, and Nepal.

More details: how to get to Tibet»

The oldest historical part of Lhasa – Old Town is well preserved with many buildings dating back to the 18th/ 19th centuries and some temples dating back to the 7th and 8th centuries. Even newly built buildings are designed to fit well in the overall look of the city. Their architecture resembles traditional Tibetan style and they are no more than 4-5 floors high not to block the view on the golden roofs of the most important temples: Jokhang and Ramoche.

The hotels in the Old Town include all modern day amenities. You can stay in the 18th-century old building and still enjoy your hot shower in the morning. Hotels and Amenities»

The restaurants offer a variety of different cuisines, ranging from traditional Tibetan to Indian, Nepalese and Western. More on the restaurant options: Where to eat.

You can find stores selling both traditional Tibetan handicrafts, as well as all the necessary clothing and equipment for your trip. Food is available in small stores everywhere throughout Lhasa and in large supermarkets.

At the same time, cultural, educational and modern sanitation services and facilities are also being developed. There are recently established Tibet University, Polytechnic schools, Hospitals, and Cultural Organisations.

Certainly,  Lhasa is a beautiful city with a rich history and friendly people. No wonder it attracts numerous tourist from all over Tibet and around the world.

The Potala Palace is probably the most well-known attraction in all Tibet. The images are featured in guidebooks and even 50 Yuan bills. It is included in the UNESCO World Heritage List. The distinct architecture and unique atmosphere combined with ancient artifacts displayed inside impress its visitors.

To enjoy the spectacular view of the Potala, we recommend going up the hill in front of it. After taking photos of the palace, come down and walk towards the main gate of the city. After that, you can join Tibetans walking around Potala Palace in a clockwise direction, spinning prayer wheels to send thousands of prayers.

The Jokhang temple is one of the most important religious sites in Tibet since its housing the statue from the time when Shakyamuni Buddha lived.

The main building of the temple is four floors high. All the buildings in the center of Lhasa cannot be higher than four floors. That allows everyone to see the golden roof of Jokhang from roofs of all other buildings in Old Town. Jokhang is recognized as the World Cultural Heritage by the UNESCO.

The most important statue in the temple is more than 2,500 years old and it was consecrated by the Buddha himself.

Before the cultural revolution, more than 5,000 monks lived in Sera monastery. Even though only a few hundred monks live there now, it remains one of the most important monastic centers.

Drepung monastery was the residence of the Dalai Lamas before the construction of Potala Palace was completed. It is the largest monastery in Tibet.

During the time when Buddhism was thriving in Tibet, up to ten thousand monks were living in the monastery.  Although there are a lot fewer monks living there now (around 600), modern-day Drepung still shows the signs of its previous glory.

Nechung Temple is located about 1 km away from Drepung. It is best to visit it during a one day tour to both Dreoung and Nechung.

Norbulingka is the summer residence of the Dalai Lamas. UNESCO included Norbulingka in its World Heritage list.

The name Norbulingka means “Jewel Park” or “Treasure Park” in Tibetan.The complex is different from most of the monasteries that you see in Tibet. It is located in a large park with many trees and flowers, and a lake. There are several palaces in the park, with the 14th Dalai Lama Palace being the most interesting.

Norbulingka is very popular during the Shoton festival when Tibetans have picnics in the park and artists troops perform operas.

Ani Tsamkhong Nunnery is the largest nunnery in Lhasa, the only one nunnery in the Old Town, and the most active one.

There are over 100 nuns living there today. Their main duty is to conduct rituals, primarily dedicated to Avalokiteshvara and Tara. In addition to the nunnery, nuns are running a tea house and a traditional Tibetan hospital.

There are many variations of spelling the name of the nunnery, including Ani Tsankhung and Ani Sangkung.

Pabonka Hermitage is one of the oldest monasteries in Lhasa, dating back to the 7 century. Tibetan king Songtsen Gampo meditated there before the construction of Jokhang temple. However, it is lesser known and tourists rarely visit it. It makes it a great off the beaten path destination in Lhasa. Pabongka Hermitage will be interesting for meditators and people curious about Tibetan history and Buddhism.

Visiting monastery can make a great day trip outside of Lhasa. You can combine it with visiting a nearby nunnery. It will be a good trekking practice if you are going on a longer trek afterward.

Ramoche Temple is one of the oldest religious Temples in Lhasa. Tibetan King Songtsen Gampo built it in the 7th century at the same time as Jokhang Temple. The temple houses the statue of the Jowo Mikyo Dorje, representing the Present Buddha at the age of 8.

Buddha Rock Carving is called Sangye Dhongku in Tibetan. It is one of the city’s hidden gems, a lovely collection of painted rock carvings centered around a huge image of Tsepakme (Buddha of Longevity). To the right from the carvings, there is a beautiful stupa built entirely of the carved mani stones. Mani stones are rocks painted with various Buddhist mantras.

To find the carvings, join Tibetans walking the long kora or lingkor around Potala Palace.

One of our most popular group tours, starting in Lhasa, the capital of Tibet and going to Mount Kailash for a three day trekking around this sacred mountain. During this tour we visit Potala Palace, Jokhang Temple, Yamdrok Lake, Gyantse monastery and Kumbum stupa, Mount Everest, lake Manasarovar, Mount Kailash, and much more.

LEAVE US A MESSAGE OR TOUR INQUIRY 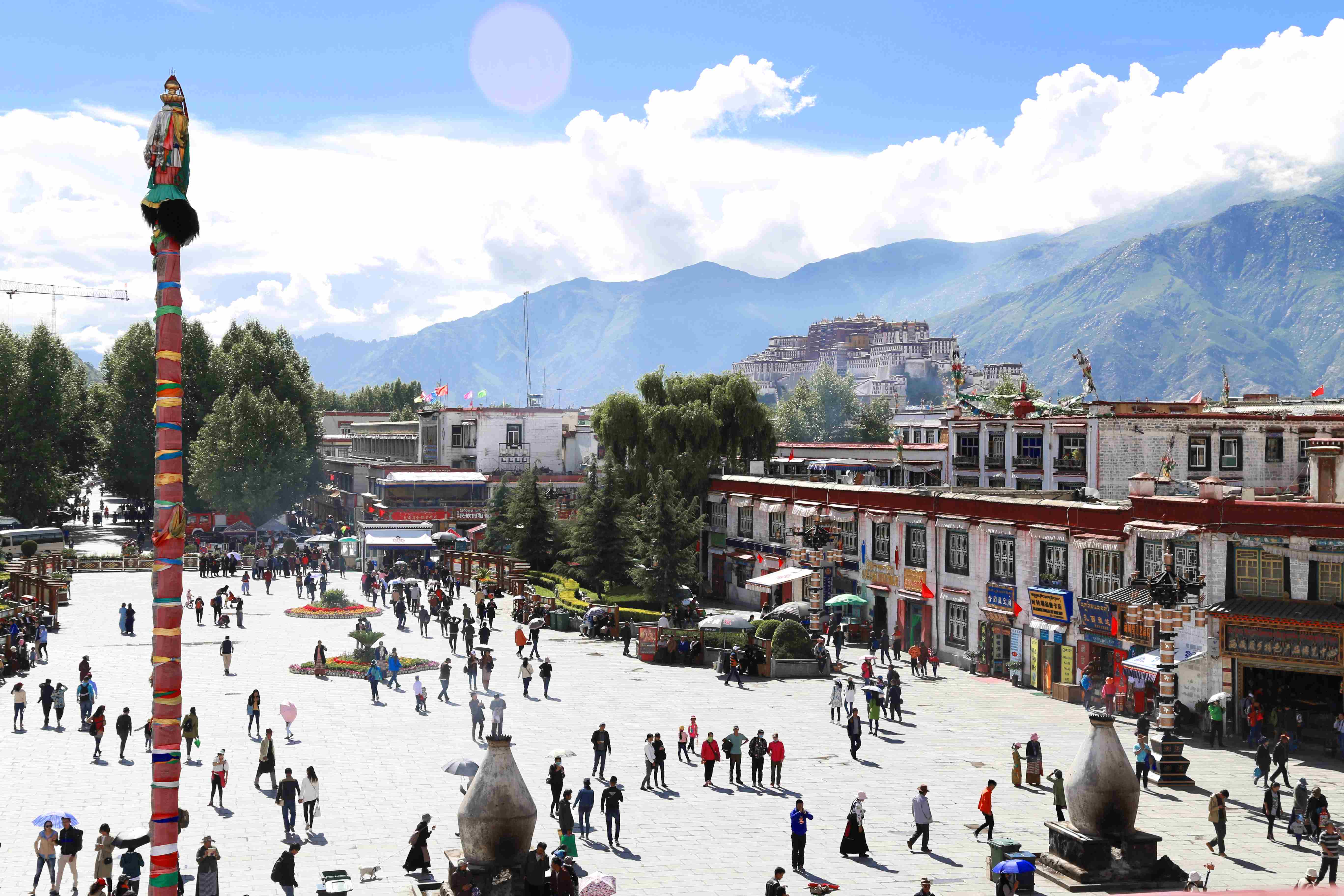