You are here: Home » Destinations » Lhasa: the Capital of Tibet » Sera Monastery

Before the cultural revolution, more than 5,000 monks lived in Sera monastery. Even though only a few hundred monks live there now, it remains one of the most important monastic centers. The monastery complex includes printing house and three colleges in addition to monks quarters.

Sera Monastery was founded by Tsongkhapa’s disciple Jamchen Coje in 1419. There are three colleges in monastery complex: Sera Me, Sera Je, and Sera Ngagpa.

The monastery withstood cultural revolution, but the colleges were damaged.

Every day, except Sundays you can see the famous monk’s debates in the courtyard. They usually begin in the afternoon, so the best time to visit Sera is after 2 pm.

The debates are an important part of studying Buddhism. Monks of the Gelug order believe, that along with studying the texts, it is important to practice what they’ve learned. They gather in the courtyard to ask each other questions about religious topics to ensure that they understand it well.

For visitors, it is an interesting performance. Monks accompany their discussions with specific gestures. They change partners, gather for discussions, joke and enjoy the process. 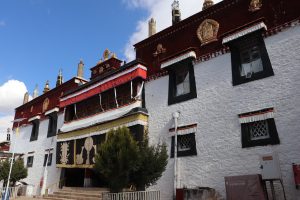 The largest college in Sera monastery complex. The Hayagriva (horse-headed deity) chapel in the college is one of the most important in Sera, and parents bring kids there to get the blessing. 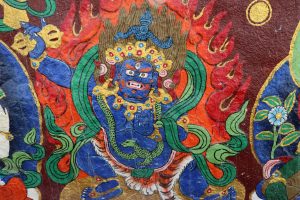 Sera Me college was erected at the time of the construction of Sera monastery. Monks were trained in philosophical studies there to receive the Geshe degree, the highest degree in religious studies. 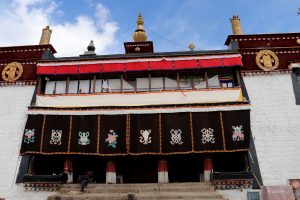 Sera Ngagpa is the tantric college in Sera monastery and the oldest building in the complex. It served as an assembly hall before the construction of the modern day main assembly hall.

Things to do nearby 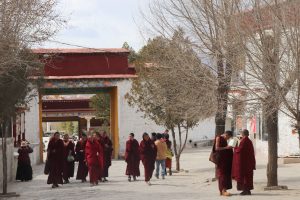 Walk around the monastery

Many Tibetans walk around the monastery (the circumambulation around the holy place is called kora and it is always walked in a clockwise direction) and you can join them not only to experience the local culture but also to see some interesting views. The small kora around the monastery will take approximately 30 minutes. 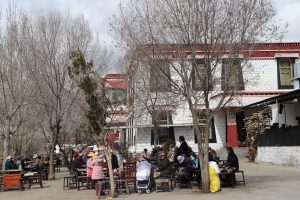 The tea house inside the monastery is run by monks and many locals gather there to get a cup of delicious sweet tea or to have lunch.

Join Tibetans to rest in a shade of trees and prepare to explore the monastery complex.

This private tour takes you from Lhasa to Yarlung Valley and Samye Monastery. Yarlung valley is the birthplace of Tibetan civilization. You can see Yumbulakhang, an ancient fort and the first surviving building in Tibet. After that, you will visit Samye, the first Buddhist monastery in Tibet.

Share via: Facebook Twitter Print Email More In this article, we explore the best meditation places in Tibet. Tibetan Buddhist monks have been practicing meditation for centuries. Meditation is an essential part of studying Tibetan Buddhism. At the same time, … Read More

Share via: Facebook Twitter Print Email More In this article we will cover everything you need to know to prepare for Mount Kailash trek, known as kora in Buddhism and yatra/parikrama in Hinduism. You will find information about required documents, … Read More

Share via: Facebook Twitter Print Email More Tibet is often called the Roof of the World because of its high altitude. In this article, we collected the facts that illustrate and prove that Tibet holds this name for good reason. … Read More

Share via: Facebook Twitter Print Email More Mount Everest doesn’t need an introduction, It is the highest mountain in the world and the most famous one.Everest is located on the border between Tibet and Nepal and is accessible from both … Read More

Share via: Facebook Twitter Print Email More There are 7 great reasons to visit Tibet, although we are sure that you can find even more. Please, feel free to share with us your reason to travel to Tibet in the … Read More