Sera Me college was founded at the same time as the Sera Monastery itself. Monks in Sera Me college were trained in philosophical studies for over 20 years, to receive the Geshe degree (an analog of PhD degree in the religious studies).

The first chapel is dedicated to Ta-og Chogyel, the worldly Dharma protector of the East. He is the wrathful deity in the left chapel. The dominant statue is that of Yamantaka and consort; a large beautiful and fearful image. Numerous old vajras are hanging from one of the beams on the roof. There are three iron scorpions on one of the pillars, to ward off the negative influence of the Nagas.

The next small chapel contains a Stupa with an image of Tsongkhapa inside and the statues of Shakyamuni and Tsongkhapa seated on either side.

The next chapel houses the most sacred image in Sera Me, a statue of Shakyamuni called the Miwang Jowo.  Influential Miwang family, one of the principal benefactors of Tsongkhapa,  commissioned the Jowo statue in the fifteenth century. This is a fine work and probably the original. A large figure of Amitayus in that chapel and the Eight Great Bodhisattvas stand along the walls. The wrathful forms of Hayagriva and Acala guard the shrine.

The last of the rear chapels is dedicated to Tsongkhapa, who sits in the company of many important lamas from the Gelug order. The First, Second, Third and Fifth Dalai Lamas are represented as a Jamchen Choje, the founder of Sera and Gyaltsen Sangpo, the monastery first abbot. Atisha and Drom Tonpa represent the Kadampa tradition.

To the right of Drom Tonpa, is the founder of Sera Me college Kunkhyen Jangchub Bum. On the wall near the exit are two more recent masters: Gyelwa Ensapa and a very expressive Purchok Ngawang Jampa.

The central figure in the main hall is an image of Shakyamuni with extraordinarily delicate and sensitive features. The workmanship of the halo is impeccable. You can see Maitreya and Manjushri on the sides of the main image.

On the front of the hall, there are statues of lamas, some more easily recognizable than others. There are statues of Tsongkhapa and his two main disciples, along with lesser known lamas remembered mainly for their contributions to Sera Me college. In front of Manjushri is a modern image of a portly, smiling Pabongka Rinpoche.

Upstairs are two small shrines. On the left, as you come up the stairs, is a chapel devoted to Tuwang Tsultrim. It is a form of Shakyamuni represented here by a small standing statue with notably aquiline features, suggesting its possible Indian origin. A small stone figure of Tara is to the origin of the main image. This is one of the most revered images in Tsangpa Khangtsen of Sera and has only recently been moved to this shrine. The other figures are modern and for the most part easily recognizable.

On the opposite side of the roof, connected by a small walkway, is a Tara chapel. This used to be the room where an edition of the Kangyur was kept but all 108 volumes were destroyed during the cultural revolution. In this place, a thousand small images of Tara made in China during the last century have been moved up from a smaller khangtsen. To the right of the shrine are three larger images of Tara, Amitayus, and Vijaya, the longevity deities. 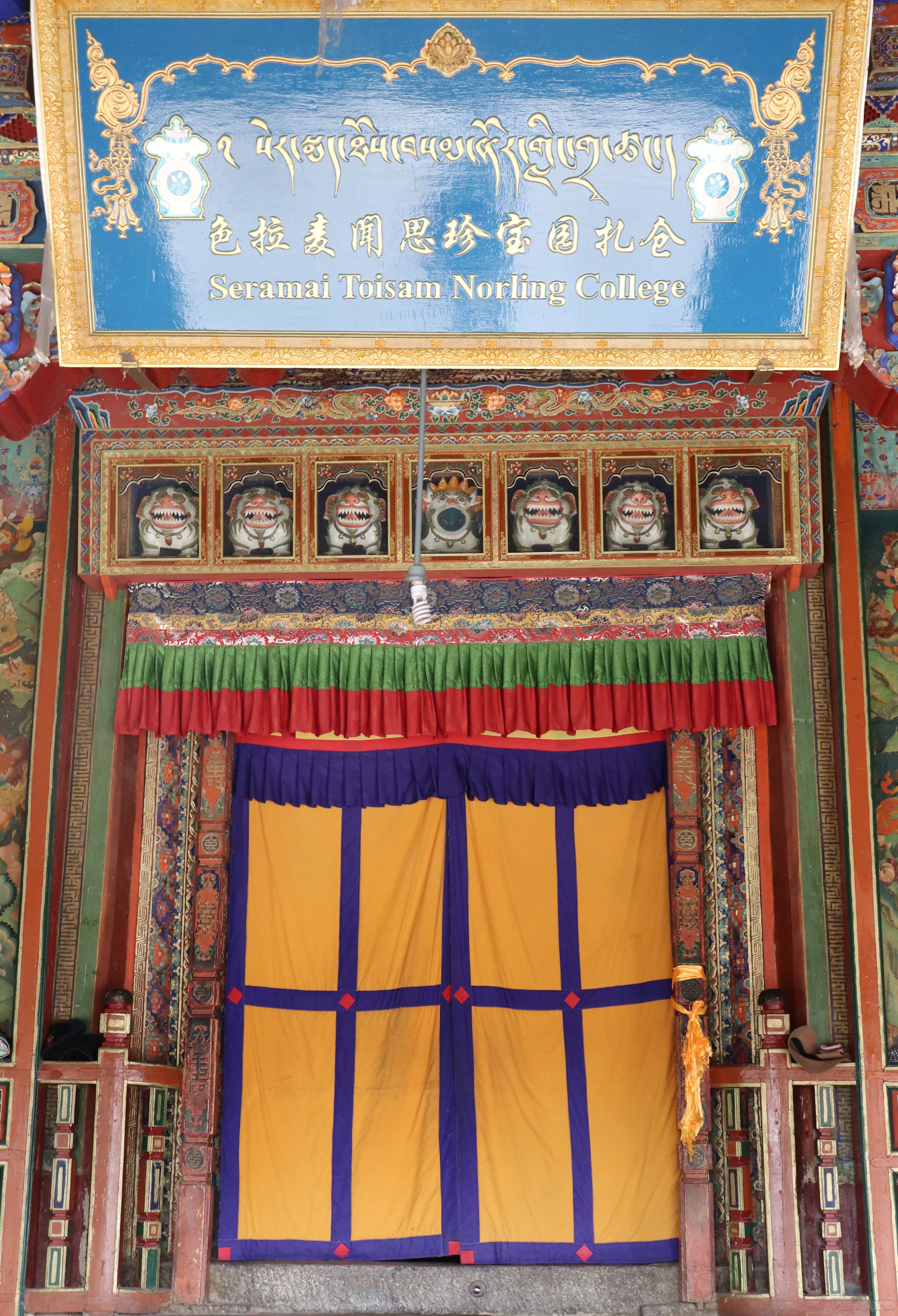