You are here: Home » Destinations » Yarlung Valley: Samye and Tsedang

Yarlung valley lies in the Southern part of Tibet Autonomous Region shaped by the Yarlung Tsangpo (Brahmaputra River). It is a part of Nedong County of the Shannan Prefecture with the capital city Tsedang, 4th largest city in Tibet. Tsedang is about 180 km away from Lhasa.

The valley is only 72 km wide, formed by the Yarlung Tsangpo and Chongye rivers. The climate here is milder and altitude is lower than in most other regions of Tibet. That’s why there are good agricultural fields in the valley. The Yarlung valley became the center of Tibetan culture and is undoubtedly the cradle of Tibetan civilization.

The early history of Tibet started here, and you can see many of these places nowadays.
To this day many of the early religious and cultural objects from the 7-9th centuries survived in Yarlung. Tibetan pilgrims visit them to walk several day’s long circuit around all the most important places.

First Tibetans appeared there, and first kings unified different tribes to form the country. The oldest building in Tibet – Yumbulakhang is still standing in the valley as a reminder of these legendary times.

Tsedang is a very important town for Tibetan history. According to the legends, Tibetans were first born on the Gangpo Ri mountain near the town. Tsedang is located in the Yarlung valley, and it is usually the first stop on the way to explore the valley.

The city has a small Tibetan quarter with a few hotels and tea houses. The main attractions are the Tradruk monastery and the Yumbulakhang.

Yumbulagang was originally a fortress, and it is the first building in Tibet. With the first Tibetan king, Yumbulagang became the first palace in the 2nd century. Since then, The first kings used it to execute control over central Tibet. In the 5th century, according to the legends, the Buddhist scriptures fell on the roof of the palace. Only in the 7th century during the time of Tibetan King Songtsen Gampo when Buddhism started spreading in Tibet, these the religious texts were understood. The king moved the capital to Lhasa and Yumbulakhang became a temple.

Later, the monastery was enlarged by first the Fifth, and later the Seventh Dalai Lamas. It was severely damaged during the cultural revolution. However, it is almost fully restored now.

On the ground floor, there are a series of chapels surrounding the Assembly Hall. The layout of the ground floor is similar to the Jokhang Temple. The most important chapel is the one with the statues of the Tara (Dolma Sheshema) accompanied by the Five Dhyani Buddhas.

On the upper floor, the most important chapel is Drubtob Lhakhang. It houses fine thangka of Tara (Chenresig) made of 29,000 pearls and an ancient applique thangka of Shakyamuni Buddha.

The Samye Valley is one of the most popular destinations in Central Tibet. The landscape is splendid with mountains, beautiful Brahmaputra River, and sandy valley. The central attraction is the Samye monastery. However, if you have 2-3 extra days, the valley has a lot more to offer.

Samye is the oldest monastery in Tibet. It was established around 760-770’s. The monastery complex is constructed in the form of a mandala, representing the Buddhist Universe. Many structures are important symbols. Samye belongs to the Nyingmapa order.

It is said that king Trisong Detsen couldn’t complete the construction of Samye monastery because every night the demons were destroying it.

King invited Padma Sambhava, who subdued demons and obliged them to protect dharma.

Hepo Ri is the hill to the East of the Samye Monastery, where Padma Sambhava (Guru Rinpoche) subdued the demons, allowing the construction of the monastery.

Those who climb the hill are rewarded by the splendid panoramic view of the Samye complex, Brahmaputra river, and the valley.

There is a small temple on top of the Hepo Ri, where you can rest enjoying the view.

On the way down, you can find an impressive rock painting of the Buddha of Longevity with a wheel of dharma above it.

The Cimpu hermitage is famous for its meditation caves that Padma Sambhava used for his retreats.

You can visit the original Sambhava’s meditation cave. It is located in a small temple built around it.

The nunnery is located on the mountain offering a spectacular view of the valley below. You can hike to the nunnery and it will be a delightful day outdoors.

There is a restaurant run by nuns, where you can rest and recharge.

The Yamalung Heritage site is often visited on the trek from Ganden to Samye. Although, you can visit it from Samye, since it is about 20 km away from it. To visit the heritage site, first, you will cross the bridge over the mountain river. After that, you will have to climb up the mountain. There are stairs leading almost all the way up. You might be accompanied by goats and donkeys, that are grazing on the hills.

The scenery here is very different from that of Central Tibet. Mountains are covered with rich vegetation, and you can smell flowers in the air.

Padma Sambhava (Guru Rinpoche) meditated in the caves of Yamalung. You can visit the monastery built around the cave. There are several small temples run by nuns. 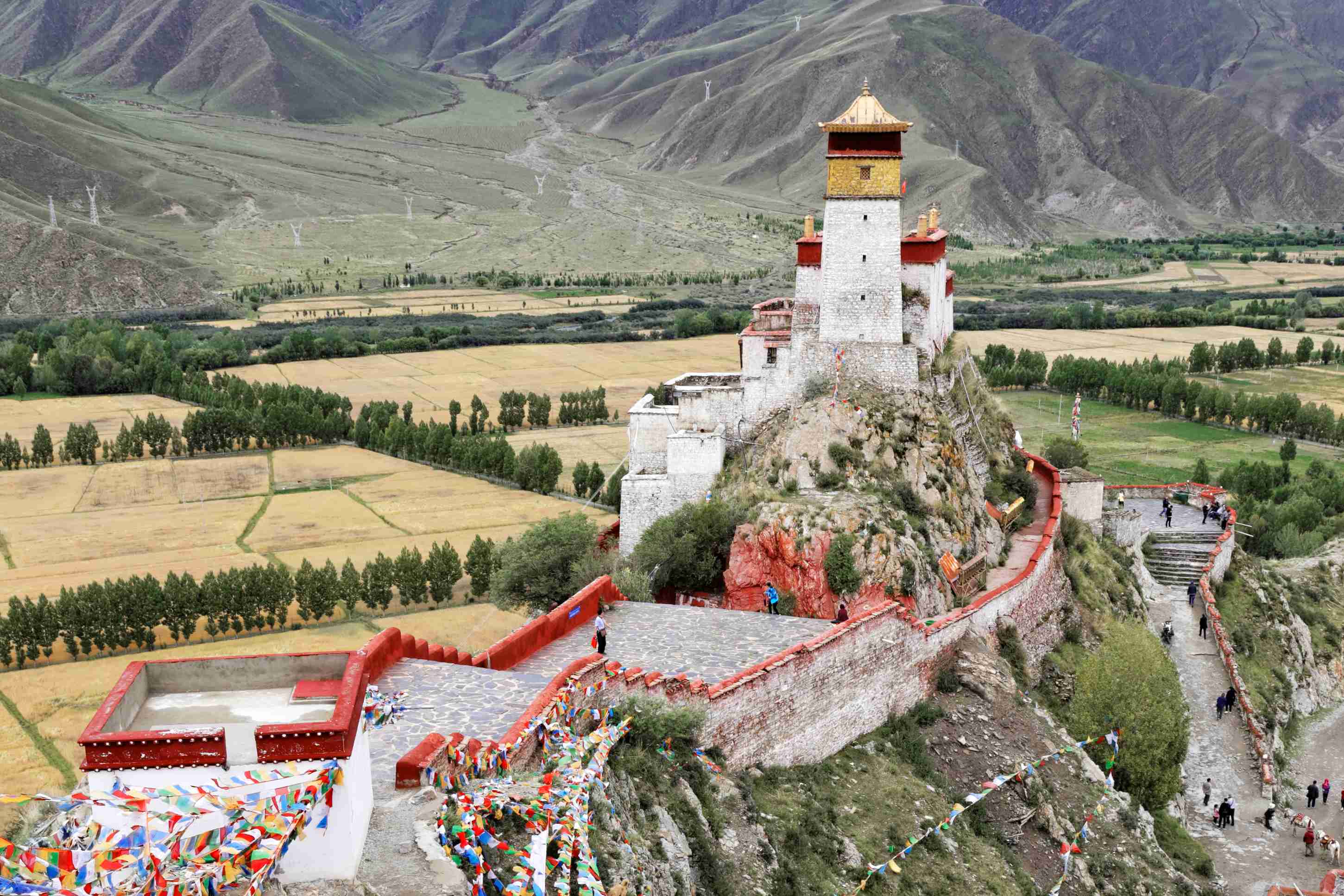