You are here: Home » Destinations » Shigatse and Gyantse » Sakya monastery

Sakya monastery (Tibetan ས་སྐྱ་དགོན་པ།) is one of the most impressive attractions in Tibet. It is located about 160 km to the South West from Shigatse on the way to Tingri.
Trum-chu river splits the complex of the monastery into two parts – one part is on the hillside, and another is on the valley below.
Monastery exterior is spectacular. It is surrounded by high black colored walls with watch towers on all four corners. The primary colors of the monastery – white, red and black. These colors represent Rig Sum Gompo (three Bodhisattvas): Wisdom Buddha (Manjushri), Compassion Buddha (Avalokiteshvara) and Vajrapani.

Sakya monastery belongs to one of the four primary schools of Tibetan Buddhism – Sakyapa.
One of the main distinctions of the Sakyapa sect is that lineage of lamas is hereditary. 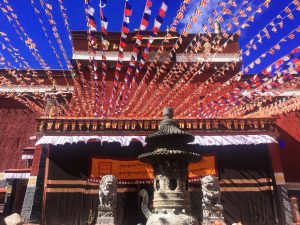 Sakya played an essential role in Tibetan history. It was once the center of political life in Tibet. During the Mongol Empire rule, Sakya Lamas allied with Mongol Khan. Due to the alliance, the Mongol Empire was converted to Tibetan Buddhism.
During the rule of Mongolian Kublai Khan in the 13th century, Sakya abbot became the ruler of Tibet. For the first time in the history of Tibet, religious leader became the head of the government. Subsequently, Sakya town served as the capital of Tibet from 1268 to 1354.

Kön Könchog Gyelpo (1034-1102) founded Sakya monastery in 1073. The first building was the Gorum Temple on the Northside on the hillside. Sakya in Tibetan means “pale soil” and monastery received its name because of the surrounding rocky mountains.

What to see in Sakya

The Main Assembly Hall Lhakhang Chenmo (founded in 1268) is an impressive structure with 16 meters high walls, and the only ancient building not destroyed during the Cultural Revolution. Thick walls (3.5 meters thick) support the building, along with huge sacred pillars. Along the walls of the hall, you will see large statues of Buddhas. These statues contain relics of Sakya abbots. The Buddha in the center contains relics of the founder of the monastery.

The greatest library in Tibet

From the Assembly hall, you can access the Sakya library containing the largest collection of scriptures in Tibet. The library collection was discovered in 2003 in one of the monastery walls. There are 84,000 scrolls, most of them are Buddhist scriptures. Some are elaborately decorated with gold letters and images of Buddhas.

The two primary Buddhist texts Kangyur and Tengyur (or Kanjur and Tanjur) are written in gold ink.

There are forty pillars in the Main Assembly Hall. Four of which are over one meter in diameter. Each of these 4 pillars has its own name, corresponding to its history: the yellow pillar, the tiger pillar, the wild yak pillar and the black blood dripping pillar.

You will see many ancient murals on the walls of Sakya, many dating back to 13-14th centuries.

Among the most prominent are murals of mandalas, murals depicting the Abbots of Sakya, scenes of building the monastery and scenes from Bardo, the state after death.

Look for the newly painted murals in the corner of Lhakang Chenmo. They depict Sakya town’s historical appearance, before the distractions of Cultural Revolution.

The chapel on the north of the courtyard contains 11 silver chörtens (stupas). The chortens contain relics of Sakya abbots. In the chapel, you can also see sand mandala.

There are several colleges where a few hundred monks from all over Tibet study. Due to all the student monks, there are over 300 monks in Sakya.

Places to visit nearby

Tashi Lhunpo is one of the six great Gelug monasteries in Tibet. It is also the seat of Panchen Lama – the second most revered Lama in Tibet. The large complex has spectacular chapels with ancient artifacts. One of the most important chapels houses Future Buddha statue – the largest Maitreya statue in the world. It is decorated with many kilograms of gold and hundreds of precious stones.

The first Panchen Lama founded the monastery in in 1418. Insde monastery complex you can visit Kumbum Stupa, the largest stupa in Tibet. There are nine levels with 108 cells.The cells display various Buddhist sculptures, murals and thangkas. 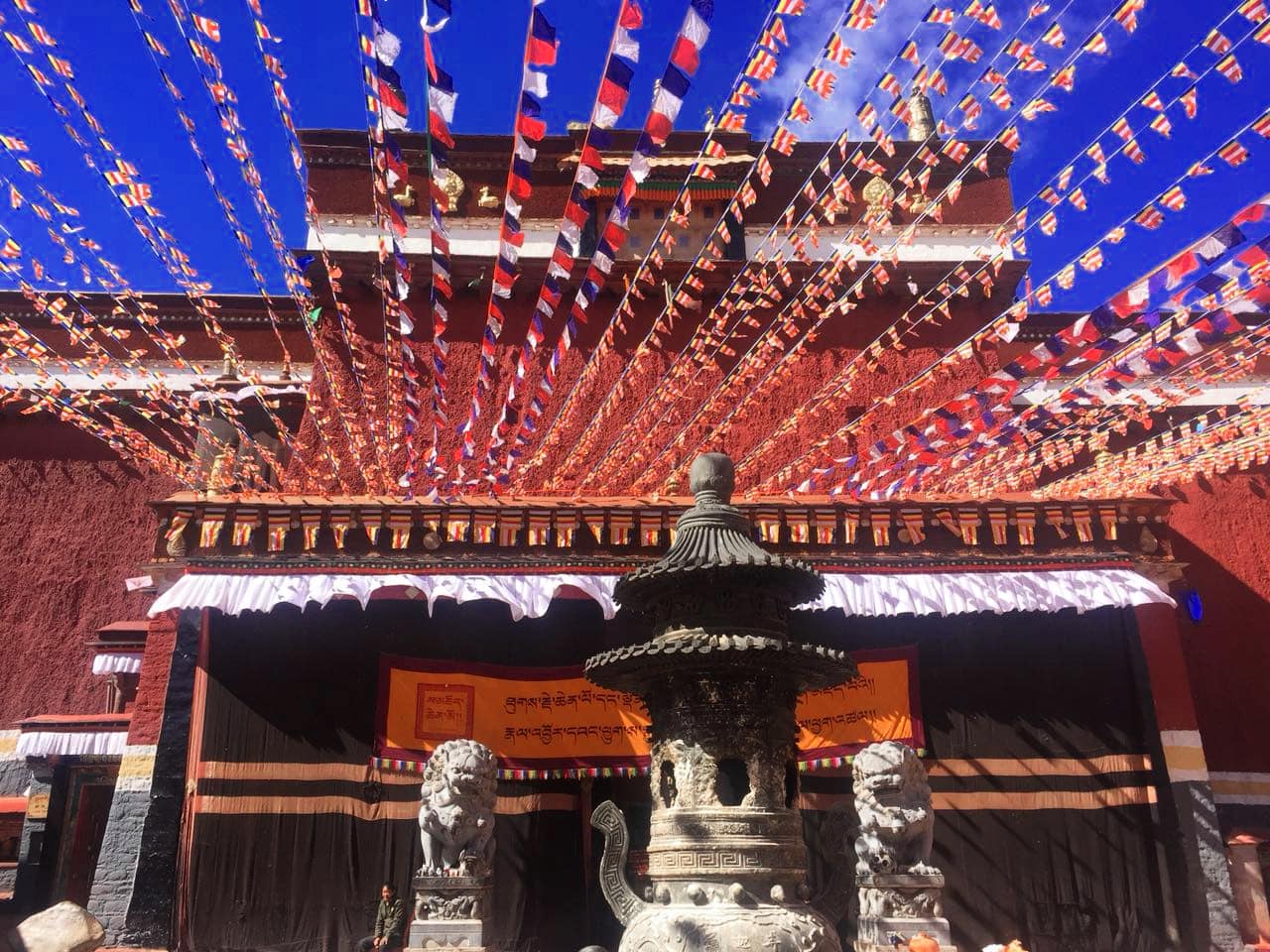